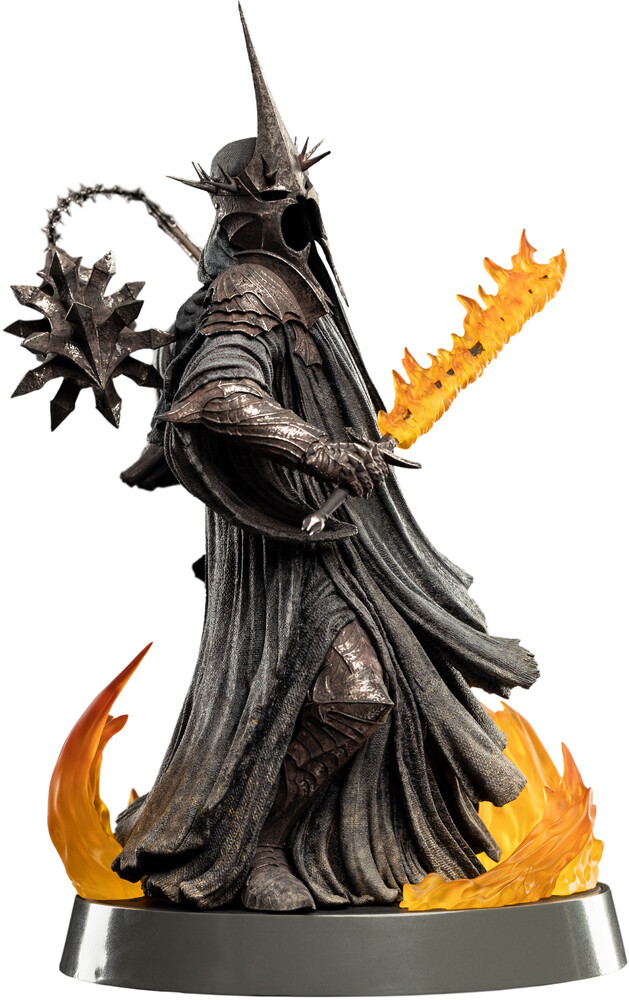 Figures of Fandom - The Witch-king

Let your fan flag fly with Figures of Fandom: iconic characters from the hottest in pop culture. Made from high-quality PVC and standing at approximately 9" tall, each character is faithfully rendered from licensed 3D assets and comes complete with a stylized environmental base.

From the certified cool-stuff addicts at Weta Workshop comes Figures of Fandom: a new generation of collectibles featuring iconic characters from film, television, and gaming!

ABOUT THE LORD OF THE RINGS

When Frodo agreed to take the One Ring to Mordor, little did he know what was to ensue across three epic tomes and subsequent film trilogy. The Lord of the Rings is an epic tale of loyalty, friendship, and sacrifice; a global phenomenon that really, now we think of it, needs no introduction. We'll leave it there, then.

Enter the most terrible of the Dark Lord's cruel servants! Rising among the fighting soldiers, only the White Wizard is an adequate foe for the Witch-king, Lord of the Nazgûl. For greater even than the dread of his spiked weapon is the terror that goes before him, chilling the blood of men.

All of us here at Weta Workshop are first and foremost mega-fans and we're always looking for new ways to express that passion through collectibles! Our Figures of Fandom are a celebration of all that we love about the worlds of film, television, and gaming, and we're incredibly excited to share these terrific collectibles with you all.

A SHOWDOWN ON YOUR SHELF

Artistry. Passion. Pure unadulterated pop culture. Experience our next generation of collectibles with Figures of Fandom! Made from high-quality PVC and standing at approximately 9" tall, each character is faithfully rendered from licensed 3D assets and comes complete with a stylized environmental base. The prototype for each character was digitally sculpted and perfected at Weta Workshop, the award-winning concept design and manufacturing facility known for its high-quality film collectibles. Fan-favourites from Borderlands 3, Apex Legends, and The Lord of the Rings are available to order now and there's plenty more to come.

These are collectibles made by fans, for fans. Clear space on your shelf and let your fan flag fly.

Please note: images are of a pre-production prototype. Minor variations may occur.