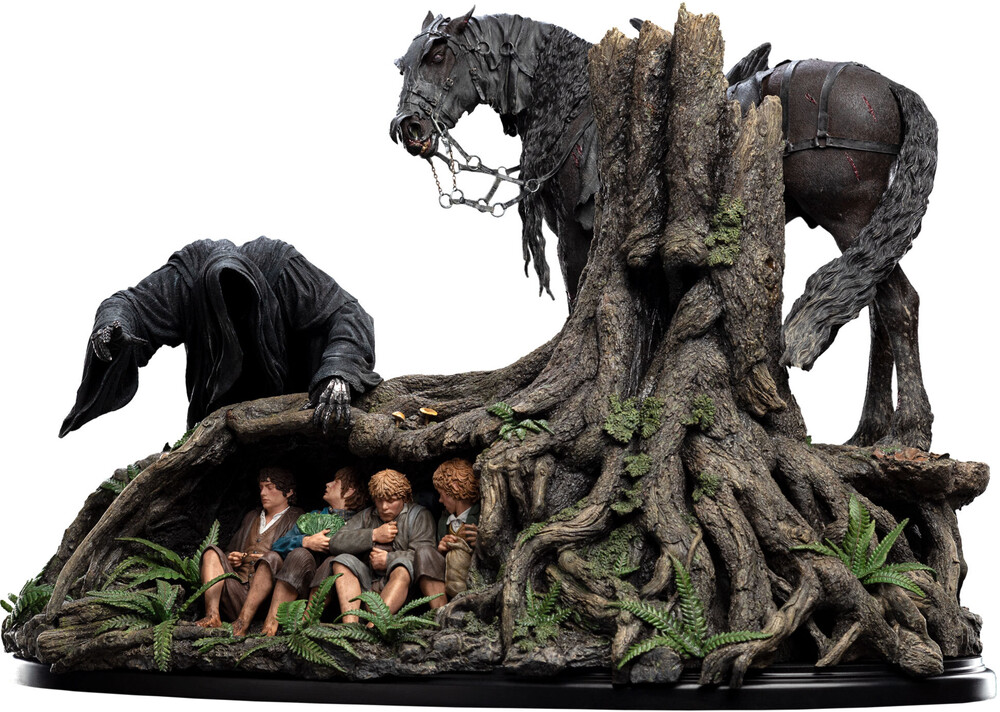 Hoping to sneak out of the Shire, Frodo and Sam cut across the countryside, only to find themselves entangled in the escapades of Frodo's cousins Merry and Pippin. One near miss with an angry farmer and a shortcut to mushrooms later the four Hobbits find themselves on a shaded trail collecting tasty fungi when Frodo is overcome by a sudden need to get off the road.

No sooner have the Hobbits scurried over an embankment and sought shelter beneath the eroded roots of an old tree when a tall, black-robed figure emerges from the mist. Dismounting its midnight horse to sniff unnaturally at the air, the stooped, black-cowled creature sweeps this way and that, drawn inexorably toward the huddled Shirelings.

Dropping to its knees, steel-gauntleted hands groping, the faceless wraith looms over them. Around the Hobbits' hairy feet, the ground writhes with worms and other small creatures seeking to escape its terrifying presence. As the figure closes in upon them and its shadow threatens to swallow all hope of escape, Frodo falls into a trance, the Ring around his neck calling to him, his finger edging ever closer to the promised safety of the magical golden band.

This Masters Collection sculpture was created in celebration of the 20th anniversary of The Lord of the Rings: The Fellowship of the Ring. As such, with a combined 40+ years of film sculpting experience, Weta Workshop's Senior Sculptors Brigitte Wuest and Gary Hunt took on the challenge of recreating the iconic moment where our heroic Hobbits have their first encounter with one of the Dark Lord's minions: the Ringwraith.

This scene was filmed not far from Weta Workshop, atop the hills of Mt. Victoria in Wellington, New Zealand, and although the original artificial tree has long since gone, the sense of depth in the surrounding wilderness remains. Along with references to original props, costumes and designs, this unique access to the location itself allowed these two artists to recreate every minute detail of this moment. From the flora and fauna of the environment to the colours and textures of the costumes; even the micro expressions of the characters. Every single leaf, every single hair and branch, placed with the utmost care and precision.

Add all the design, sculpting, molding, casting, model making, painting, and assembly time for Escape off the Road and you end up with over 3000 hours of work in one piece: A true Masters Collection.

Embodied in each of these extraordinary statues, you'll find exacting attention to detail. Materials of the highest quality. The latest technology, meshed with the finest handcraft. A reverence for the source material that can only come from artists who have lived and breathed Middle-earth for over twenty years.

More than collectibles, these are sculptures of fine art.

"It's such an iconic scene, so it was exciting to be asked to create this. I tried to capture the eerie silence when the Hobbits held their breath as the Ringwraith crept closer; his senses on high alert. You can even see the evil look of the Wraith Steed as it seeks to sense their presence too.

I really enjoyed sculpting the Steed in its solitary standing position, which had the potential to be quite boring, but with such drama in its face it comes to life and ends up playing an important part in the scene. The key was getting the right balance of tree and roots versus Wraith, Steed, and Hobbits. I believe each element is equally important but they also need to have their own prominence."