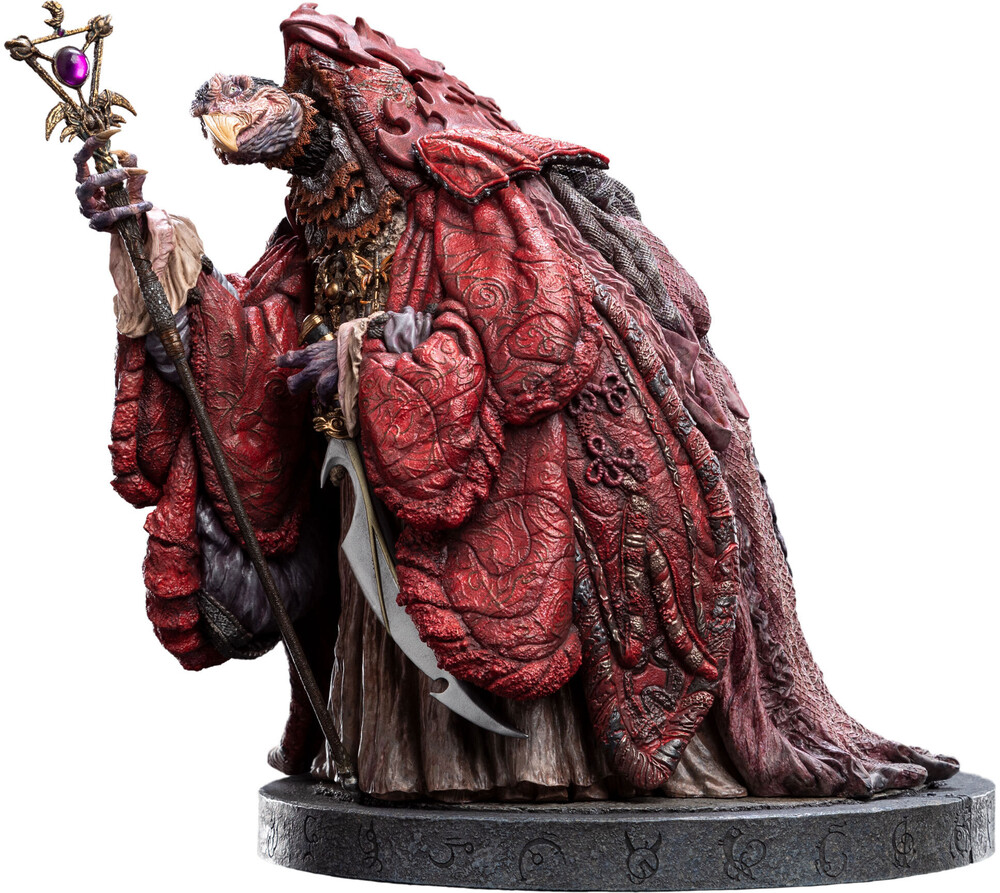 As huge fans of Jim Henson's The Dark Crystal (1982), Weta Workshop is excited to dive into the world of Thra and create premium collectibles for this iconic film. The Skeksis have remained separated from their other halves, the urRu, for too long; only by repairing the Crystal of Truth can balance be restored to the world of Thra. It falls to the Gelflings Jen and Kira, the last of their kind, to fulfil the ancient prophecy. Together they must overcome the dangers and deceit laid out before them by the evil Skeksis. "When single shines the triple sun, what was sundered and undone shall be whole, the two made one by Gelfling hand or else by none."

While all Skeksis were deceitful, dangerous creatures by nature, skekSil had honed his skills of manipulation to an artform. "This is what I do. Plant stories in ground, watch grow into truth."

Having connived his way into a position of favour with the Emperor, the Chamberlain of the Skeksis enjoyed certain privileges and revelled in the prestige that came with having his monarch's ear. When events contrived to threaten his position, skekSil was quick to act, weaving a web of suggestion and outright lies to entrap his rivals in the castle.

But when the rebel Gelfling Rian escapes the Castle of the Crystal and begins spreading his seditious ideas among the seven tribes, the Chamberlain finds his subtle council rejected by the Emperor. Desperate stakes call for harsher measures, and the Emperor forcibly ejects skekSil, replacing him as his closest advisor with the merciless General, skekVar.

skekSil cannot bear the humiliation of such public disgrace, but he buries his impulse to seek vengeance immediately, choosing instead to lay the seeds of a far more satisfying retribution to come.

So rich and visionary was Jim Henson's 1982 passion project that it inspired dreamers across the creative arts, including a whole generation of film effects artists now working at Weta Workshop. Released at a time when many of our crew were young and beginning to explore their own creative energies, The Dark Crystal was an eye-opener: it was possible to bring imaginary worlds to life, and it could be a career! For years, those of us who had fallen in love with this world hoped that someday Thra might return to our screens.

Thanks to Netflix, it has, and now we have the chance to express our fandom by creating super faithful,highly detailed collectible figures and prop replicas from The Dark Crystal: Age of Resistance.

The three different sized circular bases across our 1:6 scale Dark Crystal range represent the three suns in the skies of Thra; the dying sun, rose sun, and great sun. Familiar iconography from the floor of the Crystal Chamber are featured around the outside. Spy the symbols of the UrSkek, which have since been appropriated as signs of discord and Skeksis aggression.

"These collectibles were a dream to art direct. I feel like a Skeksis sitting at the banquet table, ready to feast on the amazing opportunities before me. There is so much to choose from!"