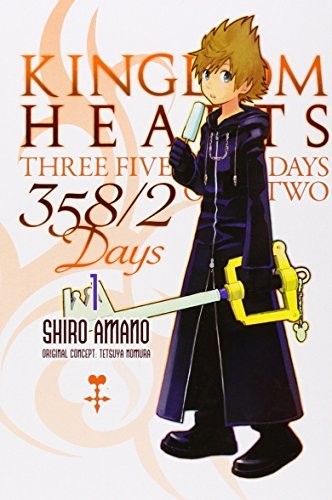 At the 2013 Electronic Entertainment Expo (E3), Sony, to the immense delight of KINGDOM HEARTS fans, announced that they are developing KINGDOM HEARTS III, the third true installment of the game series for the upcoming Playstation 4 and XBOX One consoles, with Disney. The last true installment, KINGDOM HEARTS II, was released in 2005, so this announcement was a long time coming and has put the property front and center once again, especially since it's in tandem with two much-hyped console releases. The timing of this announcement and the intensifying buzz about the property is ideal for Yen Press's KINGDOM HEARTS manga releases.

Available in English for the first time, KINGDOM HEARTS 358/2 Days is the manga adaptation of the Nintendo DS game of the same title which focuses on two characters who are hugely popular to fans of the series--Roxas and Axel--but who many felt didn't get the focus they deserved in KINGDOM HEARTS I and II. Fans have long been clamoring to know more about this pair, their friendship, and their work as members of Organization XIII, and the secrets will finally be revealed! Having never been published in this market before, KINGDOM HEARTS 358/2 Days has the overwhelming potential to sell.

PERFECT FOR FANS OF: