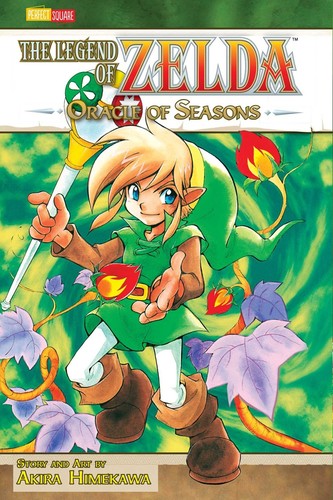 The manga adapation of the legendary video game series, now available in English for the first time! Become part of the Legend - the Legend of Zelda!The Legend of Zelda is a high-fantasy adventure based on the wildly successful and long-running video game series by game designer Shigeru Miyamoto. In February 2000, Shogakukan began publication of manga artist Akira Himekawa's adaptation of nine of the most well known Nintendo games in the series. Each story follows the adventures of Link, the hero of the video game series, as he battles the forces of evil to save the Sacred Realm.

Oracle of Seasons:In a small village in Hyrule, there lives a boy called Link who has the mark of the Triforce on his left hand. It is a mark of destiny that once again leads Link on a fantastic adventure! Transported to the land of Holodrum, Link meets Din, the Oracle of Seasons. But a plot to steal the seasons from Holodrum unfolds and Link must battle the evil General Onox to save Holodrum and his friends from a terrible fate!