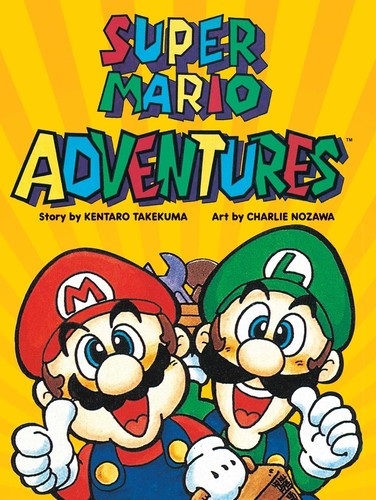 Super Mario Adventures, inspired by the bestselling Super Mario video game franchise, is a collection of comics that originally ran in Nintendo Power magazine in 1992-93.

The peril-plagued Princess Toadstool is kidnapped by the diabolical deadbeat Bowser but super plumbers Mario and Luigi hatch a plan with their new friend Yoshi to rescue her. Are the Super Mario Bros' plans a pipe dream? Can they stop the Koopa King before he forces the Princess to be his bride?!

Long out of print, this stunning, full-color graphic novel is now available once again!

Artist Charlie Nozawa also published manga under the pen name Tamakichi Sakura. His most notable works include Shiawase No Katachi (Shapes of Happiness) and Oyaji No Wakuse (Dad's Planet).

Kentaro Kawamoto was born in Tokyo in 1960 and attended the Department of Living Design at Kuwasawa Design School. He is a notorious artist, essayist, otaku, and all-around celebrity in Japan. His books include Armageddon and Me and Berabo na Hitobito. Takakuma's painting "A Dream-like Plan for the Thomas-ification of JR Chuo-line Locamotives"(2000, asrylic on linen on wood panel, 46"x35 3/4") appeared as part of the celebrated Superflat art exhibition. His only other manga work published in English is Super Mario Adventures, which originally ran in Nintendo Power magazine and was collected in 1993 into a book of the same name. The long-out-of-print book is once again available in a new edition.