The Decade That Rocked: The Music and Mayhem of '80s Rock and Metal | RECORD STORE DAY 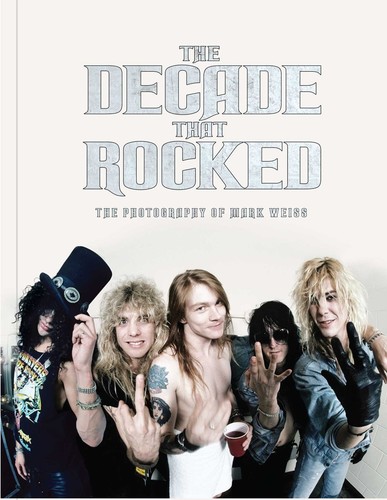 The Decade That Rocked: The Music and Mayhem of '80s Rock and Metal
Book

Featuring the iconic and never-before-published photography of Mark Weiss, The Decade That Rocked covers the biggest names from the '80s hard rock scene-including Jon Bon Jovi, Ozzy Osbourne, Mötley Crüe, Van Halen, and more-in an illustrated homage to the music and mayhem of rock's most colorful decade.

This world-class photography book documents the superstars of '80s rock, showcasing era-defining images as well as never-before-published photographs, exclusive interviews, and behind-the-scenes stories from the decade's most historic concerts, music video shoots, and backstage moments-all from the lens of Mark "Weissguy" Weiss.

Learn what went down at the photo shoot for Bon Jovi's Slippery When Wet, on set during the shooting of Twisted Sister's "We're Not Gonna Take It," Mötley Crüe's "Smokin' in the Boy's Room," and more from the MTV era.

Take a flight with Weiss to the Moscow Peace Festival as he documents the legendary jet ride with Mötley Crüe, Ozzy, and Skid Row, among others. Revisit the US Festival, go backstage with Black Sabbath at Live Aid, and hop the bus to Washington, D.C., with Dee Snider, where he testifies at the 1985 Parental Music Resource Conference.

The Decade That Rocked delivers a powerful, visual homage to the flood of sex, spandex, music, makeup, and mayhem that hit the '80s hard rock scene like a hurricane.

Credits include Mötley Crüe's first appearance in a national publication, Oui Magazine in 1982, countless magazine covers and spreads worldwide, and the iconic imagery for many multi-platinum albums including Bon Jovi's Slippery When Wet and Twisted Sister's Stay Hungry.