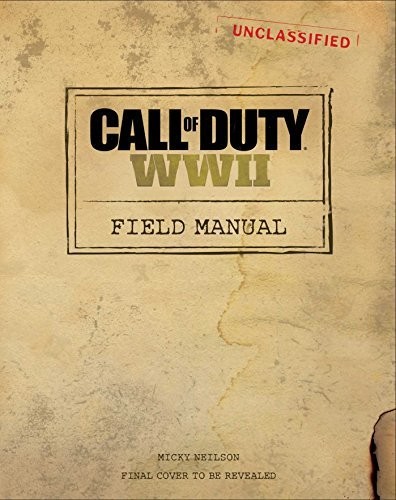 A wholly immersive in-world take on the blockbuster Call of Dutyr series.

Acclaimed for its immersive gameplay and thrilling storylines, Call of Dutyr has captivated millions of players worldwide since the release of its first game in 2003. Call of Dutyr WWII: Field Manual is an engrossing collector's item for fans of the series. Presented as an official combat-issued handbook that has been misplaced by its owner, the book pairs stunning original illustrations with an engaging narrative that showcases the statistics and history of the essential units, vehicles, weapons, and battlegrounds.

Micky Neilson is a two-time New York Times best-selling author whose graphic novels, Ashbringer (#2 on the list) and Pearl of Pandaria (#3) have both been published in six languages. Micky is a veteran of the First Gulf War, having served in the United States Army in Desert Shield and Desert Storm. As one of the first writers at Blizzard Entertainment, he has more than two decades of experience in the cutting edge of the gaming industry. He is currently working on a graphic novel, Rook, as well as a number of film projects. In 2016 Riverdale Avenue Press published his memoir Lost and Found: An Autobiography About Discovering Family, available wherever books are sold. He has also self-published his first full-length horror novel, The Turning, and its prequel, Whisper Lake, both available on Amazon. Most recently, Micky was tapped to write the comic book series The Howling: Revenge of the Werewolf Queen, a continuation of beloved 1981 Joe Dante horror film The Howling.