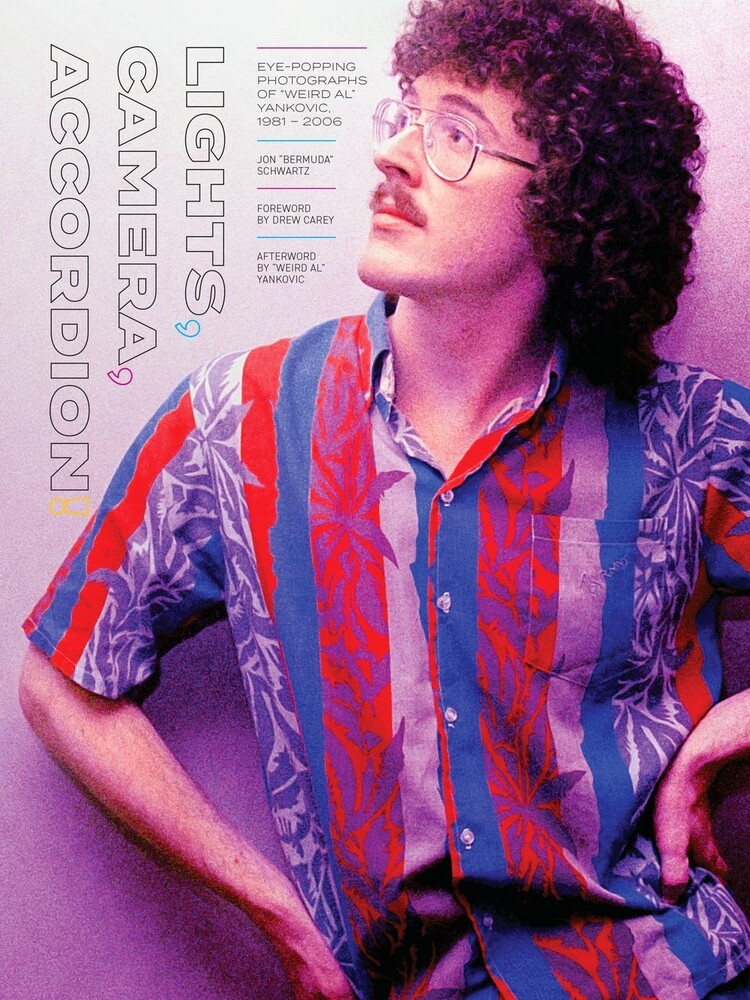 LIGHTS, CAMERA, ACCORDION! IS A DEFINING 25-YEAR VISUAL RETROSPECTIVE OF 'WEIRD AL' YANKOVIC Book Featuring More Than 300 Color Photographs Taken By Yankovic Drummer Jon 'Bermuda' Schwartz. 'Weird Al' Yankovic continues as one of our most beloved comedians, actors, and musicians. A skilled accordion player and lyricist, the California native not only crafts meticulous parodies, but also creates hilarious originals and pop culture-themed polkas. Now in his fifth decade of recording and performing, Al has maintained a career that has outlasted many of the artists that he has lampooned. Since 1980, Al's drummer Jon 'Bermuda' Schwartz has been by his side, photographing and documenting his career. Jon has taken more than 20,000 images of Al in his element: on tour, in the studio, on video sets, and backstage. Lights, Camera, Accordion! Presents over 300 images of Al, culled from Jon's personal collection of color photography, all restored from the original negatives. This exhaustive volume represents the 25 years that Jon shot Al on 35mm color film, from 1981 to 2006, before switching to digital photography. Jon additionally provides previously unheard stories and anecdotes throughout. From 'Eat It' and 'Like a Surgeon' to later classics such as 'Smells Like Nirvana,' 'Amish Paradise,' and the Star Wars parody 'The Saga Begins,' Lights, Camera, Accordion! #showcases a body of work that spans ten albums, five Grammys, and nearly 2,000 concerts to millions of fans - and is packed with the weirdness and fun that always surrounds the undisputed king of comedic music. 'There are shots of Al in the studio. Eating pizza. Having fun with his friends. Recording the 'Amish Paradise' video. Performing 'Like a Surgeon.' When I first saw it, I thought 'Wow. He looks like he's having fun with his life.' And because I know him just well enough to write the foreword to this book for free, I can tell you that he's always like that. He IS the greatest!' - DREW CAREY. HARDCOVER / 256 PAGES (FULL COLOR) / 9' X 12' / 300+ PHOTOGRAPHS